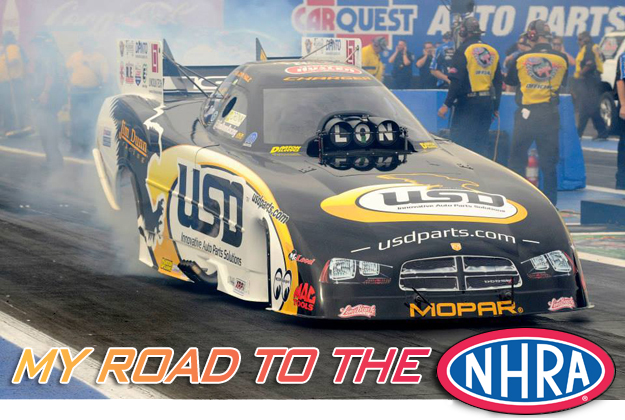 My first encounter with a race car, my parents were gone for the night and my sister was watching me. My older brother came over with some of his friends and there Camaro race car. I remember them starting it up and my sister took me out in they garage and I asked why it was so loud. She said it was because it was fast.

Fast forwarding a year or so and my dad had an lawn edger that was loud, while it was running I asked him “is it fast?”. Later on I would come to love these sounds that startled me as a youngster.

The second time I went to a drag strip I was 22 years old I drove at ET roadster. From there on I continued driving it on weekends when time and money allowed. Wanting to have my own race car I shopped around for chassis kits and considered building a race car myself, but was talked out of by friends and a local chassis builder and wound up building a top alcohol dragster.

Changing directions during the build I decided to experiment with nitro and put a blown big block Chevy on nitro. I ran it a few times locally before a split with my business partner forced the sale. After establishing my own hot rod business nostalgia funny cars caught my eye. I knew I had to have one. I had the resources and the personnel to run the car, so I said “why not.” We had a lot of success and my first full season I won the championship. We carried the championship over to the next year as well, winning races in all three sanctioning bodies. JohnHaleJimDunnRacingWhile I continued to run my nostalgia car I’m currently a rookie in the 2015 NHRA Mello Yello Drag Racing Series driving for Jim Dunn Racing. With six races under my belt I’m still learning how hard these cars really are to drive. I know I have a great team and one of the best drivers of all time teaching me how to drive and critiquing every run I make.

My eyes are set on a wally and I know I have the team and tuner to do it, but now it’s up to me. plusbug

“Our goal is to go out and do the best we can for our sponsors and fans, while making it into the Countdown to the Championship,” said team business manager Jon Dunn. “We’re looking forward to having John Hale behind the wheel to help us achieve those goals.”

For Hale, driving for the Dunn family is an opportunity of a lifetime. The Texas native earned his nitro Funny Car license in 2013 and competed in several national events in 2013 and 2014. Hale is a two-time Nostalgia Funny Car champion and actively competes on the NHRA Hot Rod Heritage series, where he won the 2011 and 2013 California Hot Rod Reunions.

“When the Dunns approached me to drive for them in the 2015 season, I knew it was an opportunity I had to take,” Hale said. “The Dunns run a tight, family-based operation, and that’s something I’m really excited to be part of. When I’m at home or on the road with my nostalgia team, we are a family. All I know how to do is race with family.”