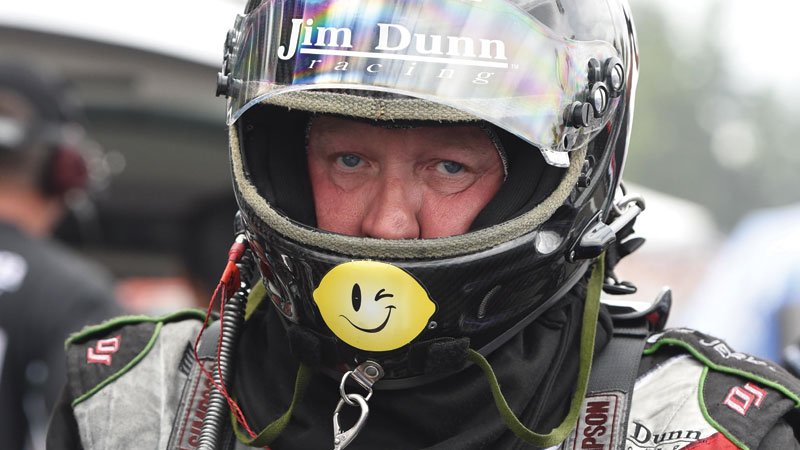 2016 Issue Number: 5 – Mopar®-campaigner John Hale laid roots in the Nostalgia drag racing arena before going pro in the NHRA ranks. He now drives a nitro-fueled Dodge Charger funny car for one of the most recognized and longstanding team owners in the series, Jim Dunn.

MOPAR® MAGAZINE: You drive a Mopar Dodge Charger funny car for Jim Dunn Racing these days — but where did you get your start in the sport?

John Hale: I started [bracket racing] with a roadster at a small eighth-mile track when I was 22, and then I built my own alcohol dragster. I didn’t have enough money to put a competitive engine in it, so I bought a nitro big block and just messed around with it. Fast forward a couple years and I got my top alcohol license at Frank Hawley’s school, then one day at Texas Motorplex, I saw Del Worsham running the Blue Max Nitro Nostalgia funny car, and that really stuck a needle in my vein. So I purchased a car, learned what not to do, won two championships, then decided I wanted to try the challenge of an NHRA nitro funny car. It’s been a challenge — but I like the challenge.

MM: Funny car is more competitive than it’s ever been. How do you rise to that?

JH: The racers out here are the very best at what they do. You get to run with the best, but sometimes it’s aggravating because they can make you look bad. You just have to keep coming back and doing the best you can.

MM: Describe that handful of moments when you’re inside your Dodge Charger going down the racetrack.

JH: It seems a lot longer than four seconds. These cars accelerate so much early on that you really have to stay on top of them and keep them in the groove — or else later down track, when the front end gets light, you don’t have much control.

MM: Jim Dunn is one of the most recognized drivers, tuners and team owners in drag racing. How did you end up together?

JH: We got a call from Jon [Jim Dunn’s son] telling us they might have a place for us. My wife, Karen, and I discussed it, met with Jon, and put together a deal. That was the easy part. The hard part is driving. Just when you think you know how to drive a funny car, it’ll prove to you that you don’t. Jim’s been patient and given me a good, safe, solid-running car while I got used to it, and we slowly stepped up. We recently broke into the 3’s [made a sub 4-second pass]. It was a big deal for us.

MM: Is there an intimidation factor at all, working with one of NHRA’s Top 50 Drivers?

JH: Yeah, you know, Jim Dunn is notorious for being hard to work with — and he is. But we cleared that up a long time ago. I told him I was here to learn, and that I wanted him to be hard on me. He is, but at the end of the day, he’s fair. Jim isn’t getting on me about something that’s very small — it’s always something I could have done better. At the end of the race, I can always look back and say he was right. That’s why I’m here. I’m here to learn, and when he talks, I listen.